It has been commented upon that the cobwebs on this blog have well and truly set in.  Well here I am, having a virtual clear out by reporting on my experience of the 25th Great South Run in Portsmouth.

I had a very firm goal in mind.  My training runs would often return a pace of around 8:30 minutes per mile.  The 10 miler on the 26th October would be furthest than I've run in a good few years but it will also be a lot flatter than my training runs around Hilly Fields so I figured I could maintain the 8:30m/m for a goal time of 1h 25m.

Given that we were staying down on the south coast we thought a little parkrun tourism would be in order.  Bognor Regis was the chosen course and we were 4 strong, raring to get a new parkrun destination under our belts.  The course could be described as hectic, it's a 4 lapper (well 3 and a little one) but it has to be said that the marshalling was excellent and at no point did I question which way to go.  I did see one girl head into the finishers funnel on lap 3 only be be told by her dad to keep going, that must have been heart breaking for her. 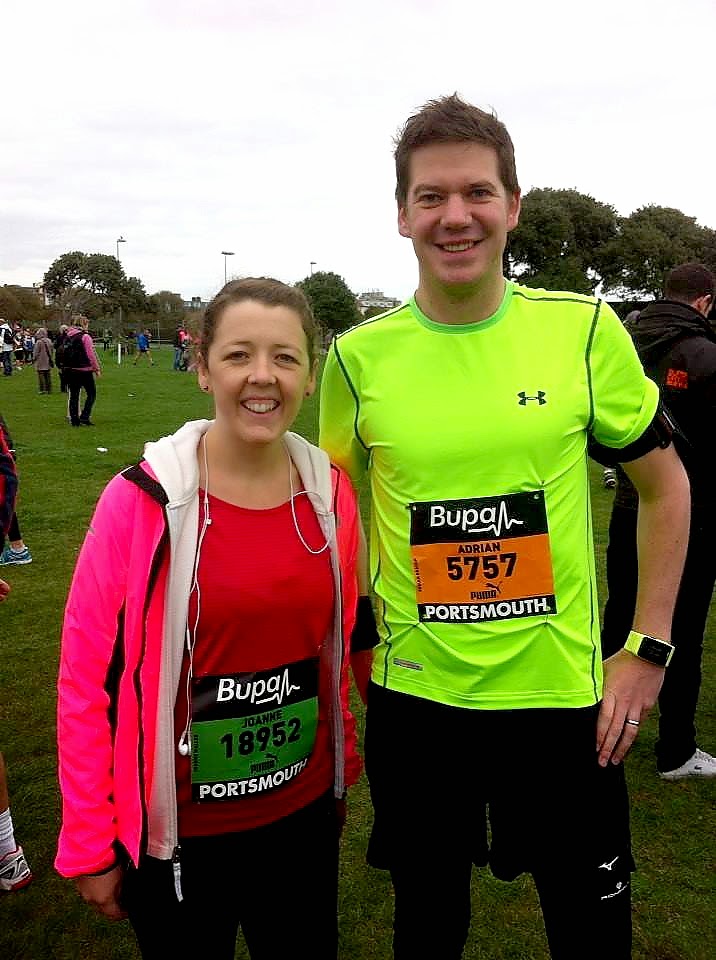 Me and my friend Jo smiling prior to setting off.

All the literature sent through in the post suggested that we should aim for an 8:30 arrival (same as my target pace) to avoid the traffic associated with 25,000 runners descending on the city.  We thought that they were erring on the side of caution and so we aimed for 9:00.  After getting stuck in the traffic associated with 25,000 runners, we finally made it to the start line with about 20 min to spare.  Not the most stressful journey I've had but we certainly cut it a little close for comfort.

I took my place in the orange wave with a fair amount of nervous energy.  I'd received some encouraging messages from some of the Hilly Fields parkrun crew which helped but I'd not run more that 8 miles in training and was anxious about how the last 2 miles would pan out.  Jo Pavey fired the starting gun and we were off.

I have to admit that I was caught up in the moment as everyone raced away at a blistering pace.  I was running 8:00m/m and going backward, I couldn't bring myself to slow down any more.  Anyway, I was feeling good, let's just hope that I don't pay for this further on I thought.  It took until mile 2 before I started making progress through the crowd, and it felt good to be overtaking people again.  I maintained the 8:00m/m pace and decided to do so for as long as possible.  Why break the habit of a lifetime, start fast and hope to hold on. I pushed on enjoying the scenery, the ambience and the supporters lining the route.  Kids at the side held out their hands for sweaty high fives as runners passed by.  I obliged by high fiving a couple of kids in a row only to hear one of the parents say 'better wash your hands later', good advice I'm sure but they could have waited until I was out of ear shot.

Miles 5 - 7 were awesome!  Lucozade had set up a distribution station just after the half way mark and as I swigged from the bottle I couldn't help but to exclaim 'Sweet Nectar', it truly was the most welcomed drink / sugar hit.  Then I passed my support team consisting of my daughter, wife, dad and Mark Isham of #RoadToSub20 fame (still in recovery) and was spurred on by their cheer.  I was flying, the endorphins were rushing, I was gonna win this whole race!

Then my legs started to tire; it started gradually but it was definitely noticeable.  By mile 8 as we turned onto the sea front I was sure that I'd stared too fast and I was getting my comeuppance. What would a real runner do I pondered? Press on and ignore the pain, only 16ish minutes to keep going if I stay at this speed.  The distance markers came slowly, 1 mile to go, 800m, 400m, through a chicane and the 200m marker and finish were in sight.  I had no sprint finish in me, I was spent but elated to cross the finish line in 2655th position with a time of 1hr 20mins 20secs.

I found my support team and we waited to cheer on Jo who started in the green wave.  In doing so I heard a shout from the sea of runners 'Adrian - BrockleyPoker' from Roni, a fellow Hilly Fields parkrunner who also beasted her target time. Congrats to her.

What a fantastic day.  The event had the slick organisation you would expect from such an established brand and I had achieved my primary objective.  Being into the numbers and stats, as I am, I couldn't help but feel a pang of disappointment not to go sub 1hr 20mins which would have equated to a sub 8:00 pace. I was, however, buoyed by my 5k splits:
I'd achieved a negative split which, given that I thought I started out too fast, is very encouraging.  I very much hope I can sign up to the 2015 race and maybe I can aim for sub 1hr 15 if I keep improving.  There, it's on the internet now so I guess I have to do it!