Our plans for this years Christmas break, as I'm sure is the case with many other folks, were to see both of our families.  This would involve driving the length of the country to get from one family home to the other.  My parents got the short straw this year and Christmas No.1 was scheduled in for Sunday 21st December down on the South coast.  Along with the standard Christmas Day traditions, my family indulged me by joining me for a run along the sea front.  I think this was a product of me being a total running bore over the past year and they finally submitted.  I was joined on a 2.4mile run by my Wife, Dad and Brother (@The_Dogfish) which was a bit of a career highlight for me.  My Mum and Daughter were in support, walking along the front and collected Dad on the return leg to shorten his efforts.  I'm so proud of them, especially my Dad and Brother who were very much out of their comfort zone but intend to start doing a bit of running, starting off by taking it easy under my instruction.

It was on the 345mile, 8hr journey from the South Coast to Newcastle where I read Mark's latest #RoadToSub20 blog post and a realisation crept over me of just how far behind the prize I was.  As stated in Mark's post, the most recent direct competition between the three of us was on the 1st November at Brockwell Park where my time of 22'07" fell 1'07" short of Tommy's offering.  The numbers paint a desperate picture but this is no paint by numbers situation.  That day at the finish line, Tommy looked spent. I probably did too but felt like I'd not had a great run.  You know the runs, where you give it your all but due to some unaccounted for variable the figures fall short of the perceived effort.  In essence I felt sure that my training was coming along better than the times suggested.

It was decided in that moment the Christmas Day Newcastle parkrun would be my proving ground where I would give it my all and try to realise a time that reflected where I felt I was with training.  On 28th December 2013 I'd got a time of 23'40" at Newcastle so my initial plan this time around was to aim for 22mins.  On the day I was happy to see how many people were out in fancy dress, I would have liked the parkrun website to have included a 'fastest Santa' icon on their results pages.  Maybe next year.  Also a huge thank you to all the volunteers who gave their time on Christmas morning to help us lot run around a park. 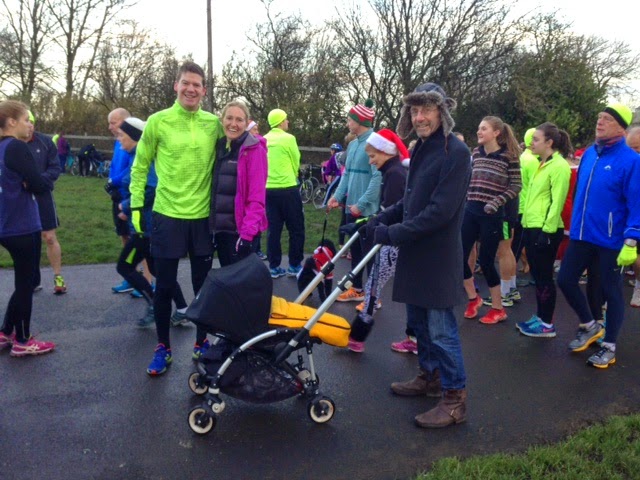 Jennie and I preparing to run. The Father-in-law looking firmly in charge of my Daughter.

I very much enjoyed Newcastle parkrun, it's a very open course on the Town Moor, with a downhill finish and is a single lap, pretty rare in my limited experience.  And the results are in.... 21'03" taking more than a minute off my previous all time best parkrun time!  I don't quite know how to explain this other than it was just one of those days where everything came good.  I think run times have a tendency to do this, even if you have a regular training pattern I believe that the body has good days and bad days, so when the moons aline you get a great performance followed by a lot of trying to replicate it.  This was a fantastic way to start Christmas Day and I'm still on a high from such a surprise improvement.

1 minute 3 seconds to shave off the time, the #RoadToSub20 continues.